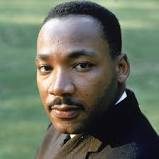 Dr. Martin Luther King, Jr, was born Michael Luther King, Jr on January 15, 1929. He later changed his name to Martin. He was considered to be one of the greatest Civil Rights Leader of The 20th Century. He died on April 4, 1968.

As we celebrate his day as a Nation on January 21st, I can't help but reflect on one portion of the greatest speech he had ever given. On August 28, 1963 at the Lincoln Memorial in Washington, D.C. he delivered his famous "I have a Dream speech." In that speech he talked about a world where all of God's children black men and white men, Jews and Gentiles, Protestants and Catholics, will be able to join hands and sing in the words of the old Negro spiritual:

Thank God Almighty, we are free at last!

But are we really free at last? 1 Peter 2:16 says "Live as people who are free, not using your freedom as a cover-up for evil, but living as servants of God." Galatians 5:13 says "For you were called to freedom, brothers. Only do not use your freedom as an opportunity for the flesh, but through love serve one another."

If we believe The Bible which is our (Basic Instructions before Leaving Earth) then we have to free our mind.

We Can't Be Free until:  We stop being Fearful of anyone that does not look like us.

We Can't Be Free until:  We stop being Fearful of losing our possessions. You can't take them with you.

We Can't Be Free until:  We stop believing Satan's Lies and focus on "God's" Word.

We Can't Be Free until:  We stop letting people lead us astray.

If we can do these few simple things then we can really say:

Thank God Almighty, we are free at last!